As 2020 kicks off to a beer-full start, I thought I'd share my favorite beers from the past year. I took a trip down my Untappd memory beer lane, and picked out my favorites from 2019: ten beers that I enjoyed the most because of their flavour or because of the moment in which they were savoured.

In the heart of the Parisian Latin quarter, surrounded by bookshops and old buildings, you'll find MONK, also known as the Taverne de Cluny. If ever you find yourself in beautiful Paris, I recommend you pick out a book at Shakespeare and Co and settle in at MONK with a cold, bubbly beer ; it is the ideal bar for people-watching, book reading, and catching up with old friends.

I stumbled upon this bar with my dad on our 'grand tour de bière de Paris'. Their fancy leather-bound book of craft beers (on tap, bottles, and cans) was the most impressive display we had yet to see on our tour. The waitress was extremely kind, recommended her favorite beers to us, and introduced me to my go-to IPA, the Citra Galactique by the Brasserie du Grand Paris.

A flavourful burst of tropical fruits and citrus, pleasantly balanced by the bitterness, ending on a dry finish. An unmissable IPA if you are in drinking beer in Paris.

The kind owner at B.E.E.R., a craft beer bottle shop and tasting room in the 11th arrondissement in Paris, recommended Fruit Train to me. I was skeptical at first, as I had already picked out a different sour beer to take home that night, but he convinced me to give it a try anyway because it was that good, apparently.

The most impressive feature of this raspberry-passionfruit-cherry gose is its stunning, bright pink glow. I could have looked at it forever if it didn't taste so good. A juicy, fruity, berry explosion in the comfort of my small Parisian apartment. A complex yet refreshing potion.

I was so happy with the B.E.E.R. owner's recommendation, I suggested my best friend MJ give it a try, too. Lucky for us, the Hoppy Corner had the Swedish concoction on tap that day, which we promptly ordered and paired with a raspberry donut from the bar's neighbour, Boneshaker Donuts. The beer also paired surprisingly well with the pumpkin cake donut.

In September, my sister took a short weekend trip up to Paris for my birthday. We wanted to go out drinking so, naturally, we set off to the most Parisian bar in Paris: Brewdog Le Marais. The bar was pretty empty, so we took our time deliberating over which concoction we were going to indulge in first. This was a long and lengthy discussion, where the question was not so much which beers we were going to order but rather in which order we were going to order them.

The eavesdropping bartender behind the counter was very friendly and served us our first pints of the night: if I remember correctly, a Jet Black Heart for her, and a pint of the newly-released BrewDog vs. Cloudwater collaboration for me. I waited for what felt like an eternity for the eavesdropping bartender behind the counter to run downstairs and hookup said keg of the newly released Cloudwater.

It was fruity and bitter, a bold mouthfeel that satisfied my every requirement in a NEIPA. It was well worth the wait.

As of today, it remains my favorite Brewdog beer. 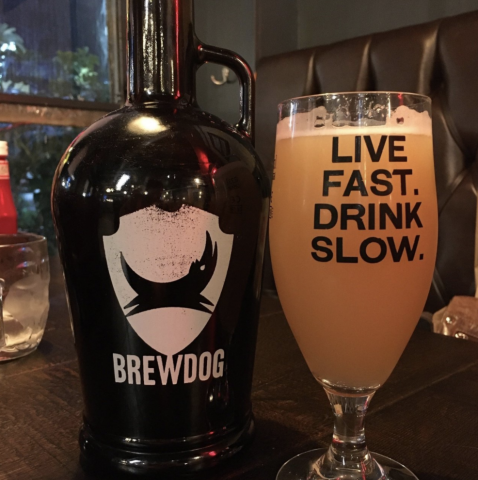 My office used to be right around the corner from a small and independently owned craft beer store. I would often stop in after a bad day and pick up a couple of bottles and cans. The owner was very chatty and reminded me every time I stepped in that he had been the first beer store in Paris, as he had predicted the craft beer trend would eventually land in France.

At this point in my life I was unfamiliar with the name Gallia. Their Brut IPA would quickly change that (and eventually drive me to visiting their brewery during Paris Beer Week). Dry, bitter and very fine bubbles, as you would expect from a Brut IPA, but with a strong tropical fruit flavour, like pineapple and lemon. I remember describing it as "the perfect beer", no big deal.

The most gorgeous, hoppy aroma. Light on the tongue, but with a dry & bitter aftertaste. I would definitely drink a pint (or two, or three...)

I was tasked by my father with selecting a couple of dark beers to pair with the evening's meal. I randomly picked out the darkest beers from the store's shelves and to this day pat myself on the back for bringing Organic Chocolate Stout by Samuel Adams home.

The luscious English beer is like a hot chocolate, if it were cold and in a beer bottle. Its smooth and creamy body is reminiscent of late nights spent drinking chocolate by the fire, or of cocoa desserts after a four-star meal.

This is the perfect beer for stout lovers, chocolate addicts, and people who think they don't like the taste of beer. Possibly the most lush and luxurious beer you will ever have the pleasure of indulging in, I can only imagine that it tastes even more regal on tap. 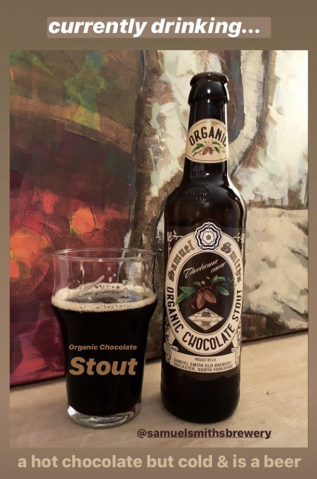 A quick trip home to visit my parents coincided with a tap takeover at the local Brewdog featuring none other than… la Brasserie Bleue, founded by my father and his business partner in my childhood home, in 2015. A year following its creation, the brewery expanded from our home to an actual brewery in the heart of sunny Nice. Today, their beers can be found in local bars and restaurants.

While the brasserie's flagship beer, La Niçoise, remains a staple of the local craft beer scene and a must-have in every niçois and niçoise's fridge, my favorite of the bières Bleue is Neige, for its thirst-quenching and effervescent character, accentuated by the light banana-clove flavour and dry finish.

In the autumn of 2019, Neige caught the attention of international player and Scottish beer giant, Brewdog. I was overjoyed to see the words BLEUE NEIGE - the only snow you'll ever find in the Riviera - on the big white board of one of the most influential craft breweries and bars in Europe. The experience was a delicious, refreshing, tipsy and proud moment for myself and everyone involved in the creation of this beer.

Devoured at the Hoppy Corner, Paris.

The second-best thing about having my favorite bartenders from my favorite bar collaborating with one the biggest Parisian breweries to create one of my favorite styles of beer, is launching said beer on my birthday! Easiest birthday party to plan, ever.

After work, I bulldozed through the crowds to reach the front of the bar and demanded my first pint of La Grass' Mat. "Don't you want to taste it first before getting a pint"? is what the bartender always asked me. This time, I didn't need a taste because there was no way that this beer could disappoint.

I have never been so right in my life. Heavy, smooth body; beautifully bitter; fragrant; intense.

I only had about 4 of these bad boys before being kindly cut off and switched to water. 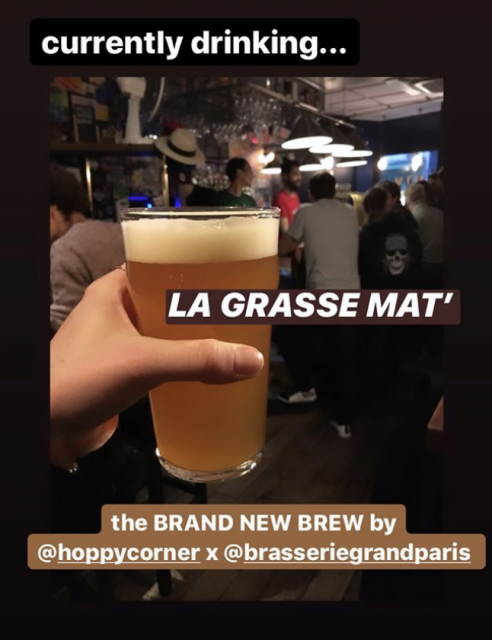 One hot and boring Sunday – August 4th, according to my Untappd - I walked over to a new craft beer bar that had opened down the street from my apartment. The bar is relatively small. The bar man is bearded, young, tall, and always wears a chemise. We talked for a while about beer, and eventually the conversation veered towards the latest Netflix films and Quentin Tarantino (Once Upon A Time In Hollywood had just been released in France).

He recommended and then poured a couple of drinks for me: first, his specialty, a beer cocktail made with a lager, peach syrup and gin (possibly the cocktail that ignited my relationship with beer cocktails).

Finally came the Apache 2.0 (have yet to try the 1.0). It was specially recommended to me by the barman as it was his coup de cœur du moment. I remember, it tasted like coffee… Very strong coffee. And alcohol! It's a very strong beer. 10% I think. 3+ hours later I paid my tab and stumbled home.

I returned to that bar every single week up until the day I left Paris. I met the bartender's lovely girlfriend and co-owner of the bar, and quickly became acquainted with their friends and family too, who welcomed me with open arms and bright smiles every time I stepped in. I have always described the craft beer movement as a warm and welcoming industry, for everyone and anyone to be a part of. This bar not only confirmed this idea, but also emphasised the kindness, open-mindedness and passion that can be found in this tasty industry.

I visited Brussels for the first time for my birthday. My best friend MJ invited me to come spend the weekend with her, and with round-trip bus tickets from Paris costing 30€ I had no excuse to decline.

One of my many birthday surprises from MJ was a tour of the famous and historical Cantillon brewery, the century-old and iconic Belgian lambic brewery. I had heard of the great Cantillon brewery before, but had never tasted their rare and (apparently) exquisite brews. For 7€ we were given a complete tour of the brewery, a taste of its history and a taste of the beer.

Following the informative, entertaining and delicious tour of the brewery, MJ led me to my second birthday surprise: the Wanderlust beer festival organised by Brussels Beer Project, a craft beer festival regrouping 12 international breweries in the heart of Brussels. ProTip: if you're ever worried you don't see enough beards in your life, head to a craft beer festival. 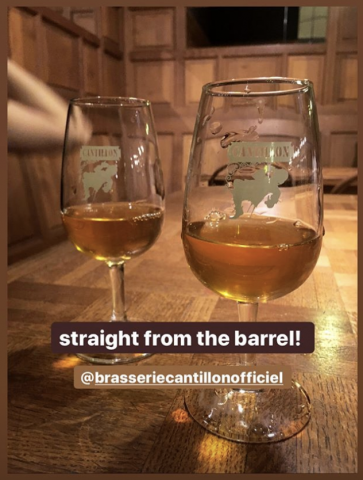 Fell in love at the Brasserie Gallia, France

First thing I saw when I stepped through the Gallia gates was about a dozen drunks hot tubbing in what I believe was a kettle. They had a barbecue going and were completely oblivious to the small groups of tourists visiting the brewery as part of Paris Beer Week.

Past the drunks was the good stuff: Gallia beer on tap. I went for a pint of When Life Gives You Lemons, a "whiskey sour" beer brewed with lime juice (I guess "when life gives you limes" didn't sound as good) and aged in whiskey barrels. Light with very fine bubbles, the acidity is more reminiscent of lemons than limes, followed by a dry & firm smoky taste that is absent in the aroma.

Its 8% alcohol gradually made itself present as I toured the brewery and tasted their latest concoctions straight from the fermenters - one of which was their special Paris Beer Week raspberry sour.

Unfortunately for me, the brewery no longer produces this beer. I guess when life gives you lemons, make enough good beer until you're bought out by Heineken.

When leaving Gallia many hours later, the entrancing kettle hot tub and charming kettle-hot-tub-goers waved goodbye. The smell of grilled meat followed me all the way to the metro station. 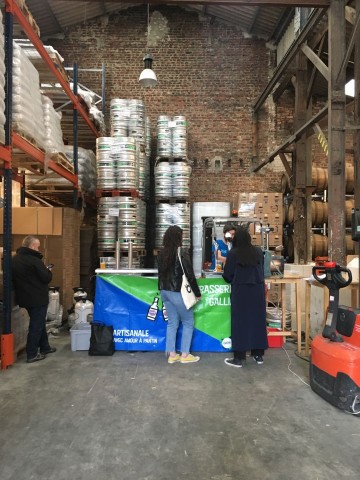 A Guide to Rating Beers Online - The Untappd App
Like Instagram or Twitter, Untappd is one of the many apps included in my daily social media sc...
Read More